Your Baby Wants *You* to Join the Breastmilk Army

One of the most important benefits of breastmilk is that it helps protect your baby from illness, while boosting their immune system. As most mums know, infants are especially vulnerable to disease, because their bodies’ natural defence systems have not fully developed.

So, you might say that a baby’s first “line of defence” against germs and illness is breast milk... 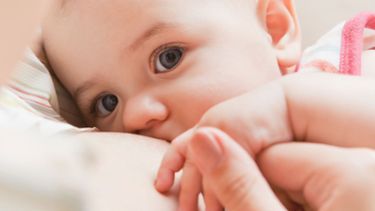 Just like a protective army, breastmilk defends your baby from possible harm by repelling “hostile forces,” including viruses and bacteria. It is a defence system that has stood the test of time and its amazing organisation and structure allow it to be incredibly effective.

Your breastmilk defence force is made up of specialised “groups,” or divisions, each with a unique role to play. From gathering intelligence about new enemies (bacteria and viruses) to addressing new threats as they occur, your breastmilk is a powerful force. Yet, while the roles of your breastmilk are varied, they all work together with a single purpose – to protect your baby.

Does all of this sound a bit too elaborate for a simple liquid? Well, breastmilk is no simple substance; it is a protective force that has developed over 1000s of generations. Here are some of the “defensive” features that make the breastmilk army such a great protector for babies.

Breastfeeding Guards Against Infection and Reinforces the Immune System

Breastmilk draws upon the strength of a variety of forces, including antibodies and other molecules, to mount effective actions against harmful microorganisms.

Since a child’s immune system does not reach full strength until age 5, or later, it also has to be able to manage defensive efforts for the long term.

Breastmilk doesn’t only respond to immediate threats from the outside world; in the pursuit of long-term peace, breastfeeding protects against chronic diseases such as celiac disease, inflammatory bowel disease, asthma, and some childhood cancers.

All this adds up to the fact that breastfed children are often better equipped to resist disease and infection.

In business and the military, it often takes years or decades to complete a project. The breastmilk army laughs at such small-time commitments! For countless generations, the breastmilk army has been developing ways to nourish your child, while fighting off invaders.

The “technology” is not new – it’s been developing and improving for millions of years – but it’s superior to anything manmade. Here are some of the secret weapons you’ll find in human breastmilk.

Human milk contains two categories of protein: whey and casein. Approximately 60% of breastmilk protein is made of whey, while 40% is casein.

Some of these proteins fight infection by neutralising bad microbes. They are hard-working and committed for long haul – these proteins have been found circulating in an infant’s blood for weeks to months after birth! Here are a few more examples of the protein brigade.

Secretory IgA protects the infant from viruses and bacteria

Lysozyme is an enzyme that protects the infant against E. coli and Salmonella.

“Fats” have a bit of a bad reputation, but, when it comes to breastmilk, fat is fabulous! Why? Because fat is another super-weapon in the breastmilk arsenal.

Human breastmilk contains fats that are essential for the health of your baby. These fats help your baby’s brain to develop and help absorb fat-soluble vitamins. Some can even fight microbes and, of course, they are also an essential source of calories to help your baby grow.

Providing your baby with healthy fats is a major part of the breastmilk’s army’s mission. Well-fed babies are less susceptible to infection and fats help to deliver the vitamins and energy that complement your baby’s own immune system. Pretty clever!

“Carbs” are another substance that has earned a bad name of late. But, lactose, the primary unique carbohydrate found in human milk, is actually a good thing!

Not only does it help to reduce the build-up of unhealthy bacteria in your child’s stomach, but, it also increases their ability to absorb important minerals like calcium, phosphorus and magnesium. As an added bonus, carbs also help the growth of good bacteria in the baby’s stomach.

Breastmilk contains “special forces,” which are uniquely equipped to handle the most intense and specialised missions. For example, immune cells, which are abundant in breastmilk when you and your infant is unwell, take the fight to threatening viruses and bacteria.

The most common immune cells in breastmilk are leukocytes. They fight infection, while activating other defence mechanisms. A really large quantity of leukocytes is found in colostrum, the first milk that mothers make for their babies.

Every army needs allies – and breastmilk is no different. Breastmilk doesn’t just attack and defend. It also builds relationships with allies by promoting the growth of good bacteria in the baby’s intestines.

In other words, breastmilk contains prebiotics to help “friendly” bacteria grow, while other substances in the breastmilk help prevent harmful bacteria from growing and reproducing. In this way, the whole neighbourhood is safe.

The range of support roles that breastmilk is able to play is impressive. But, what is even more amazing is that it does so every single day, sometimes for years. As long as your baby is breastfeeding (and sometimes well beyond), the breastmilk forces will be standing by, ready to protect and defend.

What do you think is the most special protection the breastmilk provides? Which aspect of breastmilk is most interesting or impressive to you? Please leave a comment and let us know, or join the conversation on the Medela Australia Facebook page.

Next: An Interview About Breastfeeding with Madeline from the Daily Mark
x