10 Tips for Travelling with Your Breastfeeding Baby

Coby turned 7-months-old recently and we marked this milestone with a trip to the USA with my Mum. I’m trying to make the most of my maternity leave and accompanying Mum to her friend’s memorial service was special for both of us... 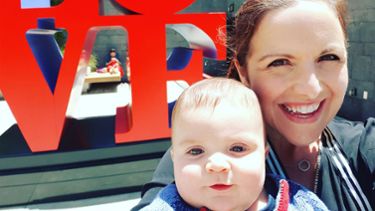 I left for the trip with realistic expectations and made the most of it. I knew that our routines and sleep patterns were not going to be perfect so I went with the flow while we visited San Francisco, New York and Connecticut.

The US Was a Very Child-friendly Place to Travel

Every restaurant we went to had a high-chair and there were changing facilities in every toilet – some even had disposable table liners.

New York airport had a breastfeeding and expressing pod called Mamava. I’d never seen anything like it before and it was great to see such consideration being paid to women on our breastfeeding journey.

Having somewhere quiet, clean and private to express or feed makes so much difference!

Our first flight was from Melbourne to Sydney. The timing worked out well for sleeps and feeds and Coby was done feeding by the time we were ready for take-off.

I was so nervous about his ears but a dummy helped to minimize the impact of pressure changes. Coby was delightful and playful throughout the flight and the dummy helped us prevent any grizzles on the descent.

Our next flights were a lot more challenging. By the time we were on our last flight home, we were “those people” that you didn’t want on your flight.

Coby cried nearly the whole 15-hours from LA to Melbourne. He would only stop if I took him into the toilet so he could look at himself in the mirror. Needless to say we spent a lot of time in the toilet that flight!

He wouldn’t sleep in the bassinet so I had to just sleep when he slept on me. I have to admit that I surprised myself with how calm I managed to stay despite the situation. I guess sometimes you just have to accept what life throws your way and save your energy rather than fighting against it.

Despite the challenging flights, the things we did in-between were special. Some of my highlights included visiting MoMA in San Fransisco (where Coby slept for 3 hours in the pram while we enjoyed the gallery) and Santa Cruz for some old school carnival fun.

In New York, I fed Coby in the Metropolitan and Central Park. We had “Breakfast at Tiffany’s” where Coby also blessed us with falling asleep so we could enjoy our meal.

I fulfilled a desire of visiting a Gospel Church in Harlem. It was fantastic that the singing was so loud that I wasn’t worried about how much noise Coby made.

We also did a twilight cruise around New York, which finished after dark. The view of Manhattan’s lights was superb.

Connecticut was a lovely surprise. Coby can now say that he has been to Yale, which was just beautiful.

Lastly, the memorial was held at a place called Stoney Creek where we cruised around the Thimble Islands. The islands were simply stunning.

I have put together some of my top travel tips below for when you next travel with a baby.

Kim’s Tips for Traveling with a Breastfeeding Baby

Try to have a good night’s sleep before you start your trip. Being well-rested helps you to deal so much better with the challenges of travel with a little one… and, potentially, a lack of sleep on the plane.

Have your baby food/water/milk in one that is handy to get out of your hand luggage at airport security. Some security teams want to go through everything you have.

Pack all of your baby’s flight stuff into a bag that you can keep at your feet on the plane (not a case). This will stop you from having to get into your overhead locker throughout the flight.

There are great travel strollers that you can take onboard a plane. Some of these even fold up into the overhead lockers. We went with a Mountain Buggy Nano because I loved the fold out leg rest for little legs. Make sure you pack rain and/or shade covers, depending on where you are going.

When boarding your plane, have bub in a baby carrier and your stroller folded before you get to the plane door. It’s much less stressful folding it when you don’t have hundreds of people behind you waiting to board.

Make friends with the flight crew. They are often happy to have a cuddle with your bubs while you get yourself sorted in your seat.

As tempting as it is to put your baby in their best clothes for travel, pop bubs in a cheap onesie (target have simple one’s for $5) for the flight. If they have a really messy nappy that leaks when you’re on a long flight, you can discard the onesie without throwing away their best clothes.

Make sure your nappy bag ALWAYS has a spare outfit for those number 3’s. One incident with Charlie many years ago had him travelling on a train in Germany with no pants on as I didn’t have a spare outfit with me. I didn’t make the same mistake this time!

We have our own travel cot that packs up small and goes with us wherever we go along with his regular sheet, comforter, etc. This way, Coby has some familiarity with his environment while we are on the move.

As soon you are on the plane, try and shift everybody in the family to the new time zone as quickly as possible.

Coby is a good pram sleeper so I tried to time big sections of walking with his sleep times. This meant we could make the most of where we were and could avoid being stuck in the hotel for all sleeps.

It’s really challenging staying in a hotel room with a baby. Mum, Coby and I needed some space after our 6 days in New York hotel. Apartments are so much more comfortable with kids and give everybody the space they need. Our Connecticut apartment was like heaven after the cramped hotel room for a week.

Investigate the child restraint laws of where you are travelling. In Australia, and many other parts of the world, it is legal to travel with a child on your lap if you are in an Uber or Taxi. It is obviously not the safest way to travel but it’s not illegal.

In some places, like Connecticut, however, it is illegal and I couldn’t find a single taxi or Uber service with a child seat. I ended up buying a new capsule that I could easily take in and out of cars for the last part of our trip and will take it with me on all future trips.

On the breastfeeding front, Coby’s reflux has really settled and when we got home from our trip, we stopped the medication all together. Onwards and upwards from here! 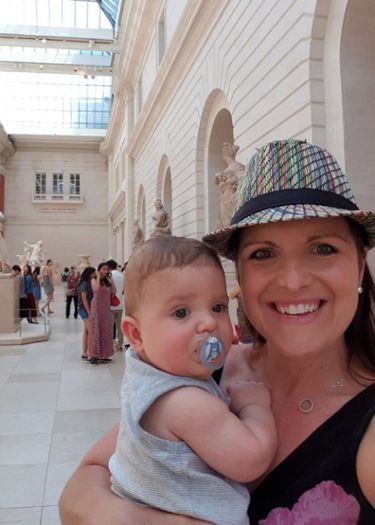 Do you ever travel with your baby? What tips for traveling with a breastfeeding baby would you like to share? Let’s have a chat here or on the Medela Australia Facebook page!

Previous: Happy Father’s Day! Thanks for Being Such a Great Dad, Joseph!