Mum’s Journey: 11 Weeks Old, Coming Out of the Fog

11 weeks in and I finally feel like the fog is clearing and we are starting to find our groove. I have now looked back over a short (whirlwind blur) 11 weeks and I’m feeling a sense of relief that Sophie is putting on weight and we are “on track"...

I never anticipated how hard breastfeeding would be the second time around. I came in so optimistic for the feeding process to be easier than the first time and became deflated quickly with the many hurdles we had to overcome.

Katie’s feeding plans, consisting of feeding/expressing and topping up, were a lot of work. That said, they gave me peace of mind in knowing I was doing what I could to get Sophie back on track weight-wise even if things took backwards steps at times.

When people would ask how the feeding was going, I would get “oh that must be exhausting” and the “why haven’t you just gone to formula” responses. I can honestly say that I am so pleased to have stuck out the hard first few weeks.

Even though sleep deprivation nearly did me in, I continued to believe the whole way through that it was just a matter of time before we found our sync.

I have to say that expressing now really doesn’t phase me too much. I have the Medela double swing maxi and it is super quick and efficient. I can pump a bottle in under 10mins!

I can see I have milk (sigh of relief) and I have stores if I feel Sophie needs a top up or is being a bit lazy at the breast, which she can be.

I am now down to expressing twice a day, which is very manageable. I know that Sophie is getting my milk, which evidence shows has so many benefits for her as she grows.

I’m slightly proud to have stuck it out and I’m cherishing her little smiles as she looks up from the breast.

Dealing with My Toddler as Well

My gorgeous, active, energetic toddler added extra strain whilst I was trying to establish breastfeeding with Sophie. I had to keep Anna entertained whilst trying to feed and express.

My husband was able to be home for two weeks at the beginning and then back to work he went. Then, the full-time load became mine, alone!

I also started to get “mothers guilt” since I just couldn’t provide the undivided time to which Anna had been accustomed. Looking back, it was only a few short weeks that this went on and now that Sophie is more efficient at the breast this is not so much of a problem.

Having wonderful family support also is a savior at times. I wouldn’t say it was easy! But was it worth it? Absolutely!

I now feel very thankful for having an amazing lactation consultant on call. I’m also thankful for the ability to be able to express and modern-day pumps that make it so easy to do so.

Are you currently breastfeeding? What breastfeeding questions do you have? Let’s have a chat and support each other here or on the Medela Australia Facebook page! 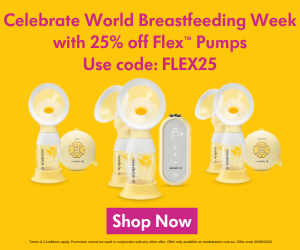