Hi there! I’m Hollie. I’m 36 and I live in the outer western suburbs of Melbourne. I’m married and have a two-year-old son Zac.

I’m 32 Weeks pregnant with baby number two. We’re really excited to have another baby and for Zac to be a big brother...

I found out the sex as soon as possible… But, my husband wanted a surprise again. Somehow I’ve managed not to slip up!

There are so many firsts to look forward to - the first bath, the first smiles and the first time baby rolls over. We were so excited each time Zac did something new and we’re looking forward to making Zac part of all of this babies firsts.

My Breastfeeding Journey with Zac Was Great

I had a pretty good breastfeeding journey with Zac. I had expressed some colostrum and stored it in the freezer to take with us to the hospital before having him because I had a lot of leakage from about 7 months pregnant. 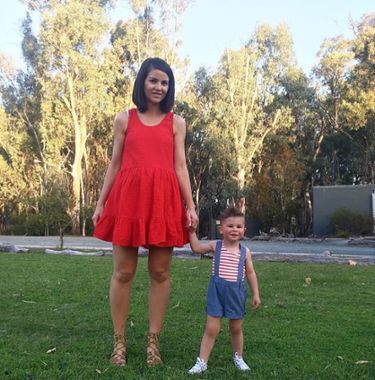 But, I Still Have Some Fears

Zac latched right away and I had a large supply of milk. Zac, unfortunately, suffered with colic and reflux, which was very stressful for us as first-time parents. I think that is one of our fears of having a newborn again.

My other fear is the fear of CHD. My brother was born with CHD and, unfortunately, he passed away when he was 3 1/2. So, I think there is always fear around having a new baby with CHD and what that could potentially mean.

We have a fantastic OBGYN. He’s really thorough and supportive and sent us for thorough testing. He also knows our history. So far everything looks good. But there is always the off chance that something was missed in the scans. If that’s the case, I hope it would be picked up at birth.

Technology and treatment has progressed so much over the last 25-30 years, but it’s always in the back of your mind.

Zac is Getting Ready

We decided to transition Zac into a bed and toilet train him over the Christmas break. We didn’t want to be doing it too close to when the baby would be born. We didn’t want him to feel like he was being kicked out of his cot for a new baby. Fortunately, he took to them both so well.

We also read stories to him each night about being a big brother, having a new baby in the house and things changing at home. We also talk about how much we love him and how much we love the baby. We’re hoping this is a nice way to get him involved and used to the idea of having a sibling.

We also have a gift for him from the baby when it’s born and one for him to give the baby. We don’t want him to be bombarded, so we will try to do small things each day or night.

I’m Getting Ready for My Breastfeeding Journey

To make my breastfeeding journey less stressful with a toddler running around, I have set up some activity baskets in a couple of rooms for Zac. This way he can have a snack or do an activity while I breastfeed.

I’m not expecting the second time around to be smooth sailing. Having a toddler to contend with at the same time, I know that the more organised I am with these things the easier the transition will be… for everyone. I really just want to take it as it comes without creating any unnecessary pressure.

I’m looking forward to sharing the ups and downs of my breastfeeding journey over the coming months.

How would you describe your own breastfeeding journey? Let’s have a chat here or on the Medela Australia Facebook page.

Next: Mum’s Journey: Introducing Anna, “The Not So Perfect Mum”
x