As a mum to be, l had an idea of how l wanted the birth of my child to go. I had a good pregnancy. There were no real problems, so l was sure l was going to have her naturally. I was definitely going to breastfeed... 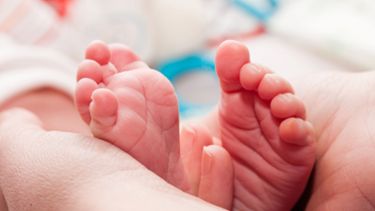 Then, at 35.5 weeks, my water broke and my daughter decided she was ready to come in the world via emergency C section since she was still breech.

My journey was starting to be a very different one than l thought l was going to have. As Sienna is my first child, this was all very new to me and l had nothing to go by except other people’s experiences and, as l know now, we all have very different ones.

Since she was early, Sienna spent 19 very overwhelming days in the Special Care Nursery. She was jaundice and had not developed her sucking reflex. As a result, she had to be fed via a nasal gastric tube with the occasional bottle as she grew stronger.

It truly is a place you never think you will end up in. I was disappointed when she was taken to the nursery and l was taken to the ward surrounded by other mothers who had their babies with them. It made everything so much harder.

Once l had feeling back in my legs, l was wheeled in to see her. I had so many different emotions going through me. She was so helpless, lying in an incubator with tubes and machines attached to her.

After a few days in the SCN, you realise you are surrounded by so many different families in similar… or harder situations than you. Every single family in there is challenged mentally and physically on a daily basis. You never really understand how hard it is until you have a child in there.

With Sienna being my first, l could be with her every day as much as l wanted too. Unfortunately, many other families were juggling time in the SCN with time at home with other children. It takes a toll on the whole family!

Welcome to the World of Expressing

Like a lot of new mums, l had a challenging start when it comes to breastfeeding. Breastfeeding Sienna at this point was not an option. But, l knew after my supply came in and she was strong enough, it would all come together.

I thought it would just come naturally to me, but, there is so much more to it than l thought. My milk was slow to come in and I started to worry that it would never arrive.

I started hand expressing with help from the most amazing nurses you could ever find. I was excited when l got my first 1ml of colostrum… then 6ml.

It does not look like much but this was such an important milestone! Shortly after that, l started using the hospital breast pump to help things along. Before l new it, l was producing milk.

The Medela Symphony double pump became my new best friend. I knew that, with this machine, l would soon have enough breast milk for Sienna with. Then, she would no longer need any formula.

I was over the moon until l got home and had to express. I was told to express every 3 hours with one 5 hour gap at night to keep my supply up.

I had my pump ready to go but it was not like the hospital one. I did not really know what brand to get at that stage but was told the one l picked was good.

Unfortunately, it had a lot of parts to deal with and l was only used to 3 very easy pieces. After half an hour of expressing, l hardly had any milk. I was so disappointed after the success l had in hospital!

I knew that l had milk left, so, I went back to hand expressing. I was tired and my hands were sore. It was a long night!

The next day, l went out to the baby shop and got myself another breast pump - the Medela Swing. It is a single pump, but, it made my nights so much easier!

While we were in SCN, l had the pleasure of meeting another mother and Medela consultant. She knew, as a mother herself, how hard it is when you have to express during the night. So she lent me her Medela Symphony for a month. It made expressing so much faster and it really helped establishing my milk supply.

It made the world of difference and l was able to start stocking some of my milk in my freezer. The Medela breast pumps have 3 parts, which makes them so much easier to use and sterilise.

They are a big time saver and you get every ounce of milk. You work so hard expressing, so losing any milk is not an option.

I never thought my Medela pump would be the most important item l take everywhere these days apart from my baby. It is!

The reason that this pump is so important to me and l speak so highly of it is that it has made my life as a new mum just that much easier while l work on actually breastfeeding.

Every mother is going to have a different experience. By sharing my challenging start to breastfeeding, l hope l can save other mothers time and money.

Also, if buying a breast pump isn’t an option, consider renting one.

What breast pump do you use? What tips or advice would you like to give to the other women in our community who may be breastfeeding for the first time? Let’s have a chat here or on our Medela Australia Facebook page!

Next: Medela and Anna from The Not So Perfect Mum Team Up to Answer Your Breastfeeding Questions
x